When fastpitch softball players fall in love with the sport and dedicate themselves to improving and playing at the top levels, their equipment should be top notch. However, in the earliest stages of a young player’s development, the best of the best equipment simply is not necessary.

Parents often learn the hard way that a youth softball glove is a temporary thing. They spend untold amounts of money every year on expensive leather gloves and take time and care to be sure of proper break in, only to find the glove going into the closet when their daughter outgrows it. Beginning players under age 12 simply don’t need these pricey gloves.

Whether your daughter sticks with the game or not, a glove for kids of this age need not last for more than one season. That’s where equipment like the Franklin Fastpitch Series 12″ softball glove comes in to play. These gloves are designed explicitly for the casual beginning softball player, and it are priced for parents who understand the often-fleeting passions of young children. It is a great tool for learning the game, without all the expensive bells and whistles that are lost on casual, recreational players. 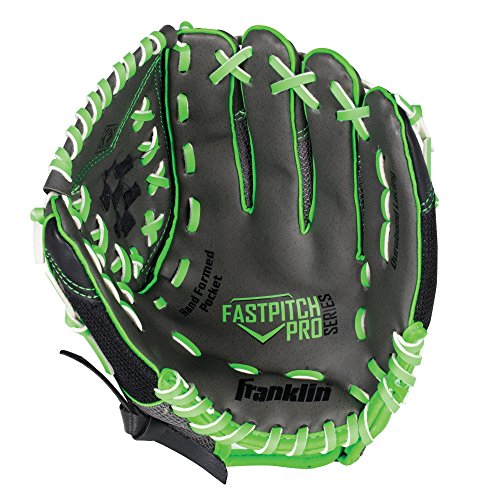 Franklin is a top name in athletic equipment, especially in batting gloves. Less known for their softball gloves, Franklin still put its experience within the sport to work in designing this glove, and it shows. The Fastpitch Series is an obviously tough glove with the backing of a major player in youth athletics.

The 12-inch measurement on the Fastpitch Series gloves is a result of it having such a large pocket, so ignore the sizing charts on this one to a point. The pocket on this glove is large enough to accommodate the 11-inch softballs normally used for ages 9 to 12. A large pocket makes room for a bit of error on the player’s part, allowing them to secure the ball even when they don’t play it perfectly. It isn’t so large to affect the transition to the throwing hand, however.

Rather than just throw another synthetic leather glove on the market, Franklin took the forethought to laminate the palm of its Fastpitch Series gloves with polyurethane. Urethane is tough, yet pliable, and it will scuff lightly without cracking. These scuffs, which develop naturally as the glove is used, will place friction on the ball and make it stick in the pocket better over time. Urethane is the most common material used in making skateboard wheels, so you know it’s tough.

Though a young player can begin playing with the Franklin Fastpitch Series glove right away, she would be wise to get it before the season and give it time to break in. The synthetic palm is slick upon purchase, but its surface will develop more traction as the glove is used. Both the synthetic-leather palm and mesh backing will become more pliable as the season wears on.

The Franklin Fastpitch Series is intended for youth players under 12 years old, but the 12” pattern is normally associated with girls in middle and high school. Very small girls may be better served by Franklin’s 11-inch pattern, either in the Fastpitch Series or the company’s Windmill series gloves. If the player is normal size, or even a little larger for her age, the Fastpitch series 12-inch glove should be fine, and may afford a second season of play.

Franklin’s Fastpitch Series is no different than any other synthetic glove when it comes to longevity. Synthetic leather lacks suppleness, and unlike natural leather, it cannot be conditioned. If it is kept dry and indoors, it may last for more than a season, but not much more. If your daughter needs a multi-season glove to grow with, a natural leather glove is the only way to go.

Franklin is not a huge name in competitive softball, but gloves like the Fastpitch Series prove that it could become one. The large pocket and solid construction of this glove are not common in the price range, and a player transitioning to a leather glove from this synthetic one will have an easy transition.

If your daughter is just beginning her softball career, or if she is just taking up recreational softball for some fun with her friends, the Franklin Fastpitch Series 12″ glove[/easyazon_link is a perfect solution. It will serve as an excellent starter glove as she learns to secure the ball, and it won’t cause buyers’ remorse for mom and dad when she outgrows it in a year. The finer leather gloves certainly have their place, but for the newest of players, this little synthetic glove is all they truly need.