Have you decided that fastpitch softball is the right sport for you, yet? Have you moved on from the cheap $20 gloves that have been a nuisance to your young career so far? Ready for something newer, and more stable and long lasting? The Easton Synergy Elite Fastpitch Series softball glove is for adolescents and adult players. It retails on Amazon for under $100, and has different sizes and handednesses available for buyers. The sizes range from a 12” to a 13”, with a 12.5” available as well, (on both hands). This glove series is made for the intermediate level ballplayer and comes in a white/black colorway with a neon logo. 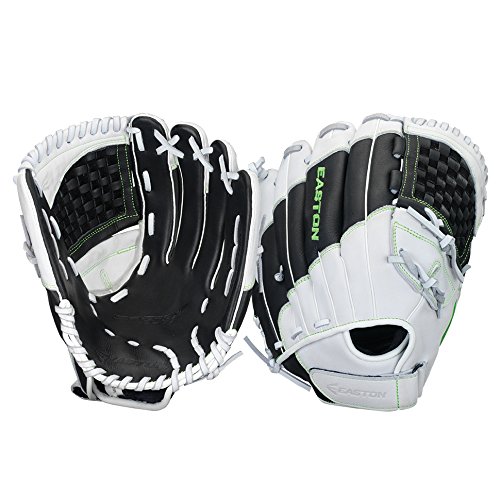 The Easton Synergy features a “VRS shock pad” right on the palm to alleviate stinging. The leather on the glove is soft deer tanned cowhide. The palm area is soft because of the oiled hog-hide lining, while the fingers get their softness from spongy-tricot finger linings. The finger-holes are better suited for smaller female hands, just make sure to try it on if you have any concerns. The Easton Synergy also comes with an adjustable velcro wrist-strap so the glove can fit every type of hand. There are models that feature an H-web, models that feature a basket-web, as well as catcher’s mitts and first basemen’s mitts. For now, we will be reviewing primarily the regular fielding gloves.

This is a solid glove for the price. It should not be considered a budget-glove because it is consistently marketed for over $50.00. The glove is not elite by any means, but it is definitely a nice piece. An advantage that this glove has is that it takes very little time to break in. Play a few games of catch, break the glove in accordingly (take a look at our glove care articles) and get out there! The leather is super soft and comfortable, while the palm pad reduces a great deal of incoming shock. The white/black colorway is very pleasing to the eye. The black stripe across the back of the glove looks sick, while the neon green “EASTON” on the middle finger adds some much needed vibrancy.

Since the Easton Synergy comes so soft and already for the most part broken in, the leather is bound to break down a little quicker than a higher-quality glove would. Someone on Amazon reviewed this glove, and reported on the fact that their glove did not last much more than one season, even with the player being primarily a catcher. Despite thiscritical review, the majority of other reivews are quite positive. Also, the picture of the Synergy on the posting may not correlate to exactly what you will be receiving. Though the picture shows a closed basket web, several reviewers point out that the glove they received actually has a H-web. That would make a difference if you are buying this glove for a pitcher. Pitchers usually are better off using a basket web so that hitters can not see their pitch grips. Because of this, the Easton Synergy on Amazon is more suited for position players, not pitchers.

Though the Easton Synergy Fastpitch Series is not a budget-series, they aren’t meant for the elite players either. This glove is good. It is soft, comfortable, lightweight, and very good looking. It comes in many different sizes and models, so there is a specific variation of the Synergy for just about every type of player. This glove should last you a fair amount of time; at least more than one or two seasons if it is treated properly. A glove that draws some similarities to the Easton Synergy is the Easton SYFP1300 Fastpitch Softball Glove. Only Easton-glove users really know how soft their gloves can get. This glove is another example of how the leather breaks down on Easton pieces. It is also relatively cheap, in around the same price range as the Synergy Elite.